May has been our most expensive month yet, which coming after our cheapest month, was quite a shock. We travelled pretty fast this month, and did two tours, something we hadn't done much of before. This, combined with the fact that we took an unexpected flight and a couple of overnight bus journeys, starts to explain why it was so expensive. 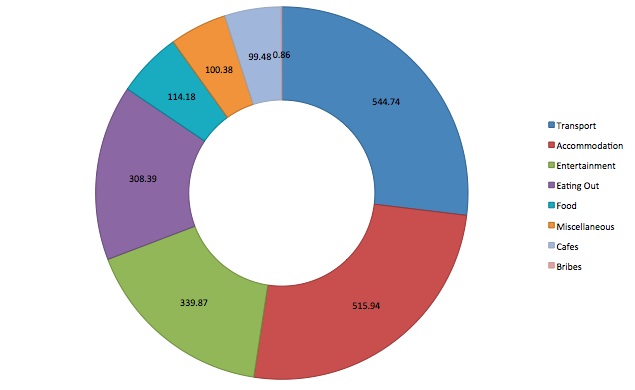 This was the first month where our spending on transport was higher than accommodation. The entertainment portion is almost entirely the four day tour of Bolivia's Southwest Circuit, which included transport, accommodation and food, but it also included entrance to a few museums and art galleries. You'll also notice the introduction of a new category: Bribes. Zab decided this would be a fun way to categorise having to pay to use public toilets, something we didn't really ever have to do in Chile, Argentina or Uruguay.

The month began in Buenos Aires, in the apartment we ended up staying in for 6 weeks, then we travelled through northern Argentina, hitting Córoba, Capilla del Monte, Cafayate and Salta. We tried to cross the boarder to Chile, but it was closed due to snow, so we went straight to Tarija instead. We spent a few days in southern Bolivia before taking a four day tour through Bolivia's remote south western corner and stopped in Uyuni before moving on to Sucre, where we are thinking about stopping again for a while, but we're not sure.

(If you want to see our full route, you can check out our map.)