Before planning our trip to France both Franca and I were a little preconcerned with how we were going to cope as vegetarians in a country that's quite famous for it's classic meaty dishes that people travel the whole world over to try, and as we slowly made our way through the country we managed as we usually do, but when it came to our last stop in Paris, we thought that surely we'd come across some great vegetarian restaurants in such a cosmopolitan capital: we were right.

Though not as vast in quantity as we'd have hoped, there are a small collection of vegan, vegetarian and organic restaurants that have opened over the past few years that are spearheading a change in the country for a change in diet, and sensibilities to where their food is coming from.

One such restaurant that's certainly putting the quality and multitude of possibilities that great vegetables and plant produce can have is the joint organic shop and restaurant of Sol Semilla. 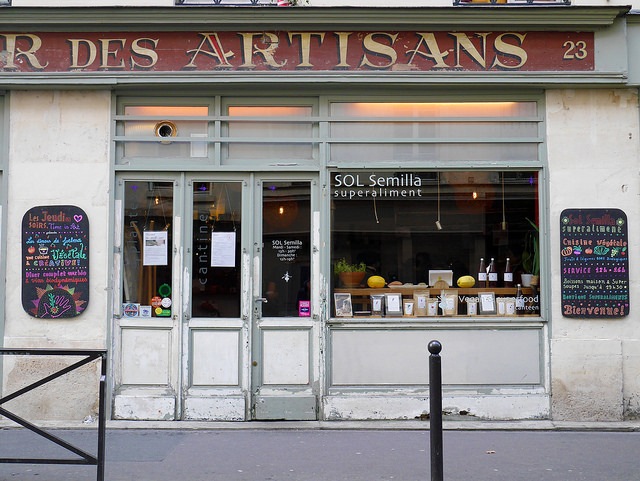 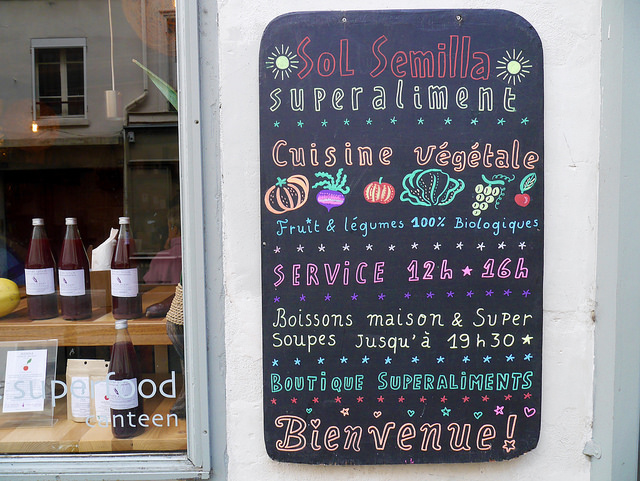 Probably the first thing we noticed once we arrived was just how many locals were there which was what we were hoping was going to be a sure sign that whatever it was Sol Semilla was selling or serving from its menu was going to be not just good, but great. 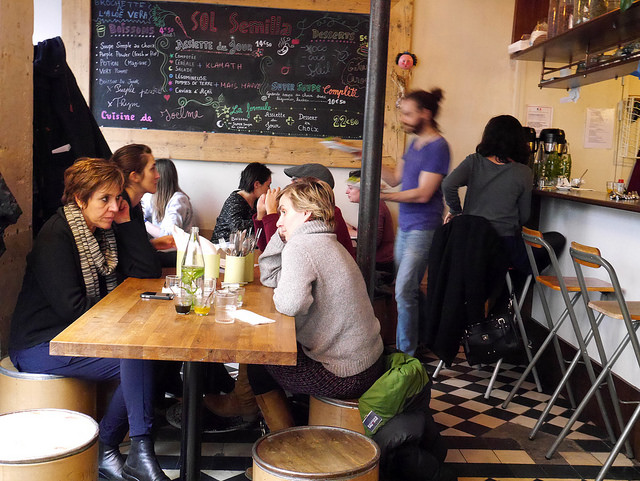 The product selling side of Sol Semilla is fantastic not only from a quality and variety standpoint, but also for the design of it, and as travel and design focused bloggers that brought a wide smile to our faces leading us next to ignore the menu and just take note of the numerous differing health and superfoods on offer.

Most of the products are are imported from South America with the largest portion coming solely from Peru thanks to a direct person-to-person relationship between this combined small independent health food shop and restaurant and their import manager living in Peru and the smaller independent farmers who they strive to help earn a fair price for their long worked over produce. 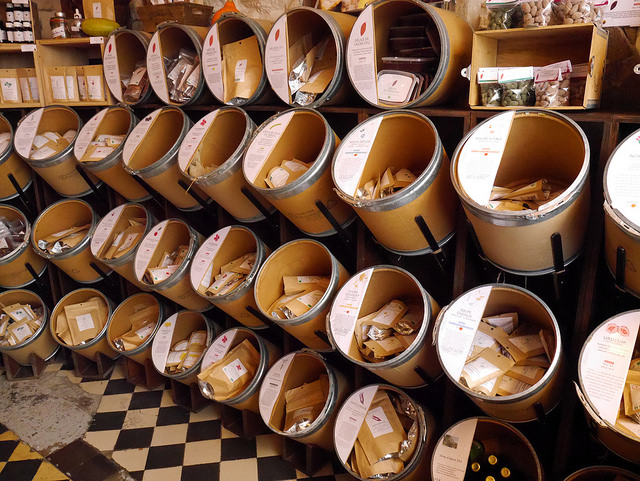 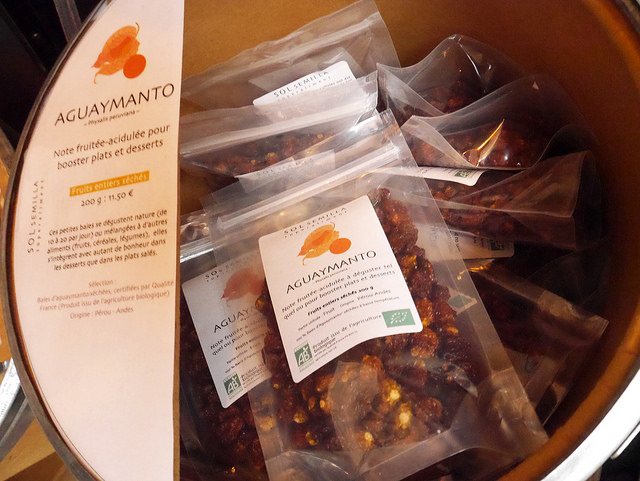 The Proof Is In The Eating

Cooked by a former Peruvian native who now resides in Paris, the wondrous daily rotated menu served by Sol Semilla uses nothing but great locally sourced fruit and vegetables to compliment the meals they make, for the most part, from the products they sell on the health food shop side of operations, giving you the best opportunity to ‘try before you buy', a method by Franca and I absolutely adore. 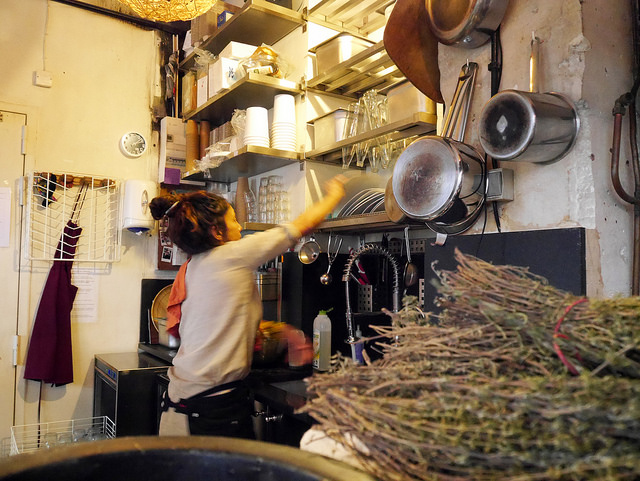 The menu is small, yet full of fresh ideas that we'd never have considered given the wide selection of new and interesting fruits, plants and spices that you don't get even in the most of diverse kitchens.

There are a couple of soups that remain on the menu most of the time, and a dish of the day that is a combination of mixed vegetables and Sol Semilla's products, and of the two options we couldn't help but do the classic travelling veggie couples trick of ordering one of each, and swapping half way. 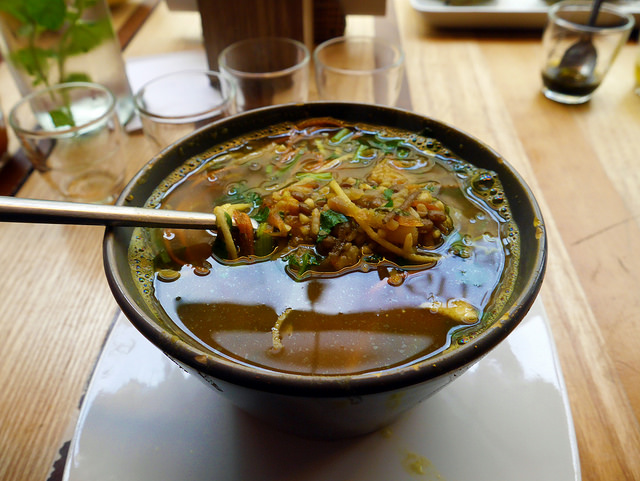 The soup was quite remarkable and a really interesting mixture of flavours, most of which were new to the two of us, and none of which we could placed the names of given even 1000 chances to guess, and whilst the broth had a delicious savory kick and the vegetables within were crisp and flavoursome, by the slightest of margins it was the dish of the day that took home the title of best dish. 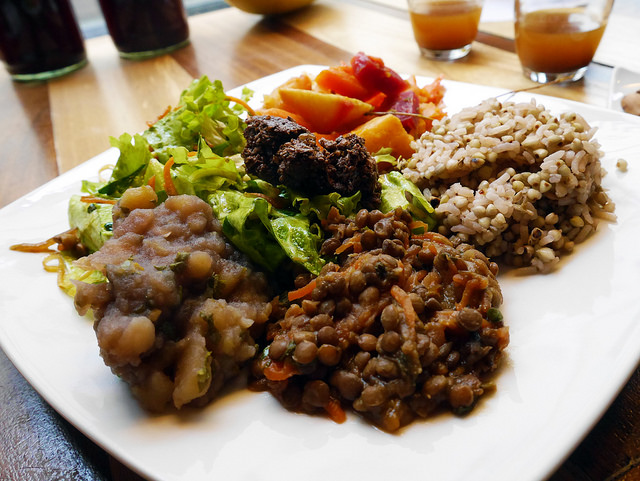 Utterly lost in the great surrounding of Sol Semilla, the decor and the fantastic friendly people we spoke to about the variety of products whilst ate, it was unavoidable that we try the three desserts on offer too which blew the best dish competition apart. 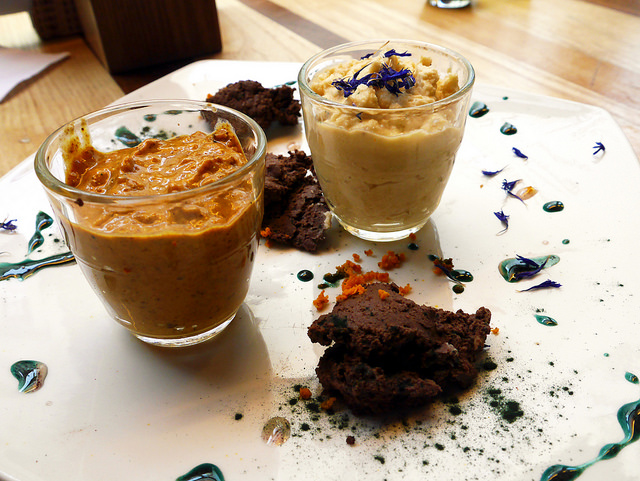 We chose ‘Xoco' which are raw cacao truffles that will have both raw vegans and vegans watering at the mouth (if you're not already from the picture!). The taste of cacao isn't super or sickly sweet as you might expect, but rather mellow and with a slight bitter kick that just goes to show how natural and raw the cacao really is.

Also we took two small glasses of ‘Sun In My Body' which is a cocktail of mixed fruit cream with banana, lemon, apple and urucum, and whatever urucum is, it's delicious! Slightly sour on the palate from the lemon juice, but complimented perfectly with banana; this was the dessert that sent Franca to heaven.

For myself it was the third dessert which had me hiding the glass away from Franca to avoid having to share. A mixture of coconut mousse and acerola, the subtly sweet and raw coconut on the tongue was divine.

Why Eat Anywhere Else?

To eat at a restaurant where passion for the ingredients comes before the passion for money is a rare thing, and for those ingredients to come from good quality stock and cooked with a mind for healthy and vegan/vegetarian living is a blessing, especially considering that it's not wrong to think for a moment that a vegan lifestyle for Parisians is still relatively new and in it's infancy, especially compared to some other popular capitals like Berlin.

Should we ever return to Paris in the future we'd be hard pressed to find anywhere that makes the food feel so special, and taste so dynamic at the same time.

Dale Davies is one half of the full-time travelling vegetarian couple of Angloitalian, Follow Us! A travel blog centered around their love for architecture, art, design and music and their growing love for living like a local with housesitting. You can follow their blog and also find them on Twitter and Facebook. Earlier this week we were staying at Casa de Bamboo in Huacachina. We knew they had a vegetarian restaurant attached, but it wasn’t until we… In the last few weeks, we haven’t been eating out much here in Buenos Aires. Instead, we’ve been making the most of having a kitchen… This recipe post was commissioned by Eating Amsterdam Tours. While housesitting in the Netherlands, I went on a bit of a baking rampage. Somehow, I… 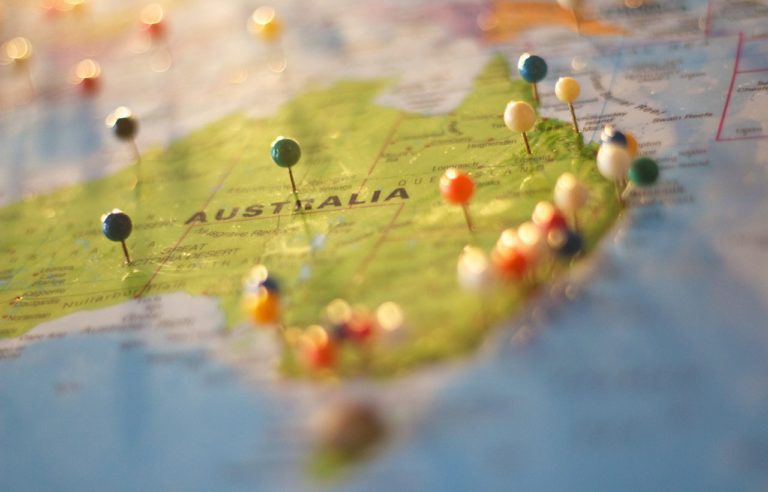